My Mom, The ScrumMaster 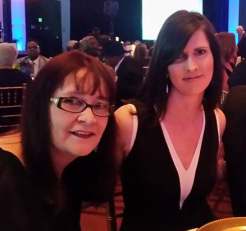 Have I told you the story of the woman that reinvented herself as a ScrumMaster in just 3 short months?  Well, that’s the story of my mom, Dottye Stewart.

As the story goes, this isn’t the first time my mom has reinvented herself.  She started out as a widowed mom to two daughters, pursuing higher education to be a positive role model for my sister and me.

After earning her MBA in Finance back in the 80’s, she did the consulting circuit for a while then quickly gained success in the life insurance industry as a marketing and business development executive.   After finding herself in a dead end job with a dead end, and morally corrupt, company last year (I won’t name names but I’m certain you could figure it out), she came to me and said, “I’m going become a Scrum Master”.  Admittedly, I laughed a little on the inside thinking there is no way someone can reinvent themselves into a Scrum Master at this point in their career.  Boy was I wrong!  If you ask my mom, she will tell you she’s been an agile leader throughout her entire work-life.  Not because she’s been subjected to my agile ways, but rather because of something called “facilitative leadership” that she learned while at GE Capital.

In October 2016, my mom began attending Tampa Bay Agile meetups regularly and, being the extreme extrovert in the family, she quickly became the social director for the ScrumMasters Guild, personally connecting with each and everyone.  Before 2016 was over, my mom had earned the Professional Scrum Master (PSP) and the ICAgile Certified Professional (ICP) and was being personally mentored by some of the best Agile Coaches in Tampa Bay from the AgileThought team.  By January 2017, my mom was gainfully employed at Bankers Financial as an Agile Coach and ScrumMaster.  That takes us to today.   While Bankers has been great training ground, she is openly pursuing new opportunities as ScrumMaster to continue along on her agile journey.

I guess the apple doesn’t fall far from the tree or, in this case, maybe the tree follows the apple.  I hope you are pleased to meet My Mom, The ScrumMaster.

Happy Mother’s Day Mom. You make me so proud to be your daughter!

Stephanie is now VP of Product Excellence at LeadingAgile focused on the growth, development, and delivery of some amazing agile products.  Recently, she spent the past two years as Executive Director - Enterprise Agility Office at Catalina leading another top-to-bottom, inside-out agile transformation.  Prior to that, Stephanie was Senior Director of Enterprise Agility at Valpak. She was with Valpak for 13 years, most of which were focused on leading their agile transformation to what became a world renowned success story published in case studies and demonstrated to over 50 different companies through the years via agile tours.  Prior to Valpak, Stephanie held past positions in the project management domain with AT&T and IBM. Stephanie's academic credentials include a BS in Marketing from the University of South Florida and an MBA in International Business from the University of Bristol in England. She also maintains the Project Management Professional (PMP), Agile Certified Practitioner (ACP), and Certified Scrum Master (CSM) credentials. Stephanie is big on tech community involvement!  Most recently, she served as an elected board member to the Agile Alliance, a non-profit organization with global membership, committed to advancing agile development values, principles, and practices. In addition, she serves her local community as an organizer for Tampa Bay Agile, the largest and most active tech Meetup in the area, and the annual Agile Open Florida event. In 2016, Stephanie was awarded Tampa Bay Tech’s Technology Leader of the Year and the Tampa Bay Business Journal’s BusinessWoman of the Year (Tech) and Emerging Technology Leader of the Year. END_OF_DOCUMENT_TOKEN_TO_BE_REPLACED
This entry was posted on Friday, May 12th, 2017 at 2:43 pm and posted in Uncategorized. You can follow any responses to this entry through the RSS 2.0 feed.
« How Do You Like Motherhood?
Capitalization of IT Labor at Valpak »

2 responses to “My Mom, The ScrumMaster”