Coming Down Off The Agile 2014 High

I’m just now finding time to blog after coming down off my Agile 2014 high.  In one word, Agile 2014 was filling … a week full of knowledge, introductions, and yes, food.  Oh, and I Tweeted my ass off!  I gained a few new followers and even met some old ones (although the guy that showed me my pic on his phone did kind of creep me out a bit).

I was thrilled to meet …

A few of the takeaways and observations I had from Agile 2014: 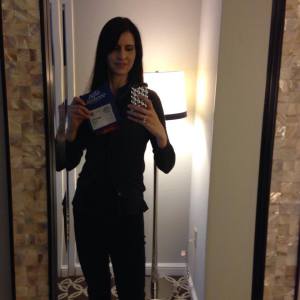 Even though you can’t see it very well, that’s me holding up my Agile 2014 badge that says “Board Member”

I can’t forget to mention the most awesome news of all! I was elected to the Agile Alliance Board of Directors for the 2015 to 2017 term.  After spending a week getting to know the rest of the board members, I know I have much to learn but I feel I have equally as much to contribute.  I am super excited for what the next few years will bring!  In fact, I’ve been jotting down ideas left and right and couldn’t help myself but pitch them now, even though my term doesn’t officially begin until January.   I’m on this train for 3 years, so this means I will definitely be seeing some of you at Agile 2015 in Washington DC.  Until then … May your Agile be fun and fulfilling!

Stephanie is now VP of Product Excellence at LeadingAgile focused on the growth, development, and delivery of some amazing agile products.  Recently, she spent the past two years as Executive Director - Enterprise Agility Office at Catalina leading another top-to-bottom, inside-out agile transformation.  Prior to that, Stephanie was Senior Director of Enterprise Agility at Valpak. She was with Valpak for 13 years, most of which were focused on leading their agile transformation to what became a world renowned success story published in case studies and demonstrated to over 50 different companies through the years via agile tours.  Prior to Valpak, Stephanie held past positions in the project management domain with AT&T and IBM. Stephanie's academic credentials include a BS in Marketing from the University of South Florida and an MBA in International Business from the University of Bristol in England. She also maintains the Project Management Professional (PMP), Agile Certified Practitioner (ACP), and Certified Scrum Master (CSM) credentials. Stephanie is big on tech community involvement!  Most recently, she served as an elected board member to the Agile Alliance, a non-profit organization with global membership, committed to advancing agile development values, principles, and practices. In addition, she serves her local community as an organizer for Tampa Bay Agile, the largest and most active tech Meetup in the area, and the annual Agile Open Florida event. In 2016, Stephanie was awarded Tampa Bay Tech’s Technology Leader of the Year and the Tampa Bay Business Journal’s BusinessWoman of the Year (Tech) and Emerging Technology Leader of the Year. END_OF_DOCUMENT_TOKEN_TO_BE_REPLACED
This entry was posted on Wednesday, August 6th, 2014 at 8:18 pm and tagged with Agile 2014, Agile Alliance and posted in Uncategorized. You can follow any responses to this entry through the RSS 2.0 feed.
« Reflecting on Agile Open Florida
Valpak Agile Flyer … “Livin’ an Agile life” »